In 1986, the City of Potterville undertook the challenge to mitigate the impacts of the Michigan Department of Transportation’s proposed corridor for new Interstate 69 when an alternate route was proposed and subsequently approved by the state, moving I-69 approximately 1/8 of a mile south just beyond the southern fringe of the City limits. In anticipation of this new transportation corridor, the City, with much forethought, established a Tax Increment Finance Authority (TIFA) on February 11, 1985. At that time, the City anticipated establishing two Tax Increment Finance Authority development areas adjacent to the existing temporary I-69/US-27 corridor. This concept was later amended to consolidate the two development areas into a single development district.

The success of the TIFA is dependent upon functional and recognizable land use arrangements, development control, infrastructure preparation, and plan development. Many individuals and cooperative efforts will lead to its success in the coming years. It is the intent of TIFA and its Board to provide instrumental guidance in the planning, development, and financing of improvements within the development area. The TIFA Board of Directors is pleased to present a Development plan to the City Council and citizens of the community and expresses its optimism about the future of the City.

TIFA meetings are open to the all public and scheduled for 2nd Monday of each month at 5:30 p.m. in City Hall unless otherwise noticed and changed. 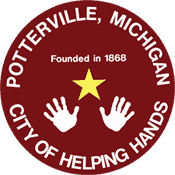 © All rights reserved City Of Potterville. The City of Potterville is an equal opportunity employer and provider.